Dante, the oil that speaks Italian 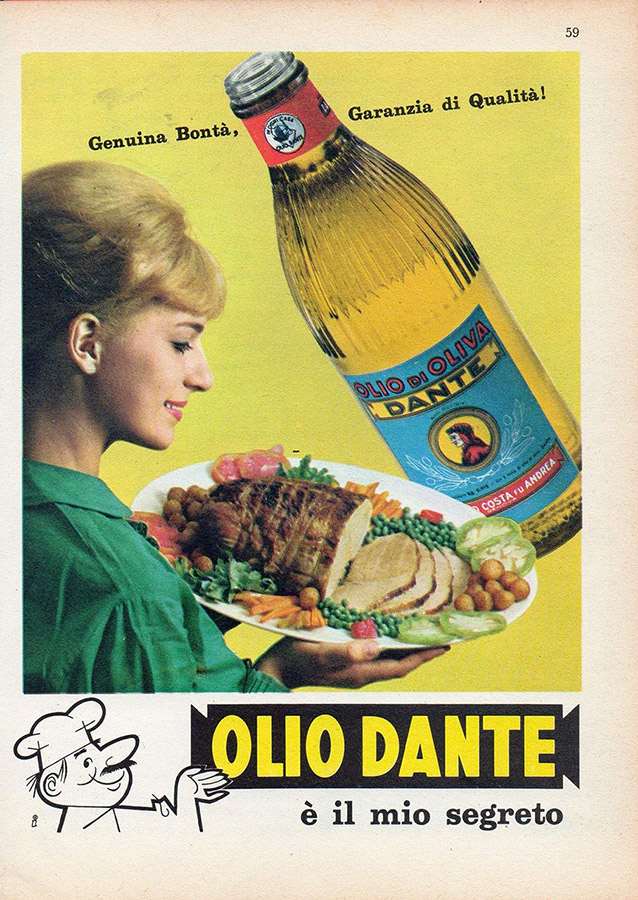 The story begins in 1849 when Andrea Costa – the progenitor of the homonymous Genoese family – starts to sell olive oil and textiles from Sardinia to Liguria, later specialising in buying raw olive oil in Mediterranean countries. Giacomo Costa, Andrea’s son, has a very ambitious vision: bringing a little bit of Italy into kitchens around the world. That is what would lead him to found the “Giacomo Costa fu Andrea” trading company in 1910.

The first bottles of oil are sent to North America, Argentina and even Australia under the Dante brand as early as 1898. In the various trips they make to consolidate their sales network, the Costas realise the importance of connoting the product with an immediate link to Italy. This is why the name chosen for their oil is that of the renowned Italian poet Dante Alighieri, a classic symbol of Italianness.

As early as 1904, Olio Dante is so well-known in America that it receives its first Gold Medal for the best product at the World’s Fair in St. Louis, followed by its second medal in 1915 in San Francisco and the third in 1935 in Brussels. The choice of name is so well-received that someone immediately tries to jump on the bandwagon of its success, with the Spaniards launching an oil named “Beatrice”, Dante’s beloved woman. Meanwhile, the need to transport products quickly pushes Giacomo Costa first to procure used cargo ships, then to have them built directly, bringing about what would later become the Costa Cruises fleet.

As early as then, Olio Dante becomes the star of various advertising campaigns.

In fact, the Costas are amongst the first, in 1928, to sign contracts with the EIAR for radio adverts, at a rate of 2 lire per word. 1933 marks the advent of the first printed ads on the pages of “Le Vie d’Italia”, a historic publication of the Italian Touring Club. In 1959, Olio Dante makes its television debut on Rai in Carosello with Peppino De Filippo as the famous “first-class cook” and, later, with the duo of Paolo Panelli and Bice Valori on the Italian riviera.

In 1985 the Anglo-Dutch multinational Unilever takes over Olio Dante, only to then sell it in 2008 to the Spanish group SOS-Cuetara. In April of 2009, the brand finally returns home to Italy thanks to its acquisition by the Oleifici Mataluni Group in Montesarchio (Benevento), where the production is still located to this day.

In 2012, the entire company changes its name in honour of its core brand, becoming Olio Dante S.p.A.

Find out the Olio Dante range