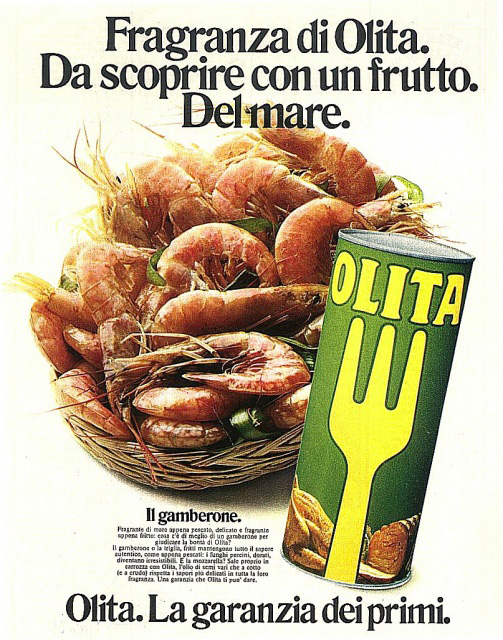 The story of Olita is linked to the Star food company – founded in Brianza in 1948 and famous for briningseveral winning insights into the cooking habits of Italians, by launching products such as the stock cube, designed in the 1950s and now the true symbol of the brand; the first ready-made prepackaged sauce in 1962; the first teabags; and, of course, Olita, the multiseed oil launched in 1963 with the famous three-tined yellow fork on the label. These products were entirely innovative for their time and allowed Star to establish itself, in the following decades, as a symboliccompany for Italian cuisine.

In 1970, Olita presents two new products: peanut oil and sunflower oil, launching the “magnificent recipe book” and the “La verità è cruda” campaign for their use both raw and cooked. Olita’s true strenght, mentioned in a famous 1974 print advert, is “la miscela più felice di oli vari” (“the finest blend of various oils”). Meanwhile, the memorable slogan “L’Olita mio” (“My Olita”) dates back to 1985, a slogan which would identify the product and make Italians familiar with it.

In 2006, the Italian-Spanish group Gallina Blanca Star is formed, which would later sell the Olita brand to the Oleifici Mataluni Group in 2012. And so the label with the three-tined fork, ever the perfect frying oil, is once again completely Italian and is today a proud addition to the brand portfolio of Olio Dante S.p.A.